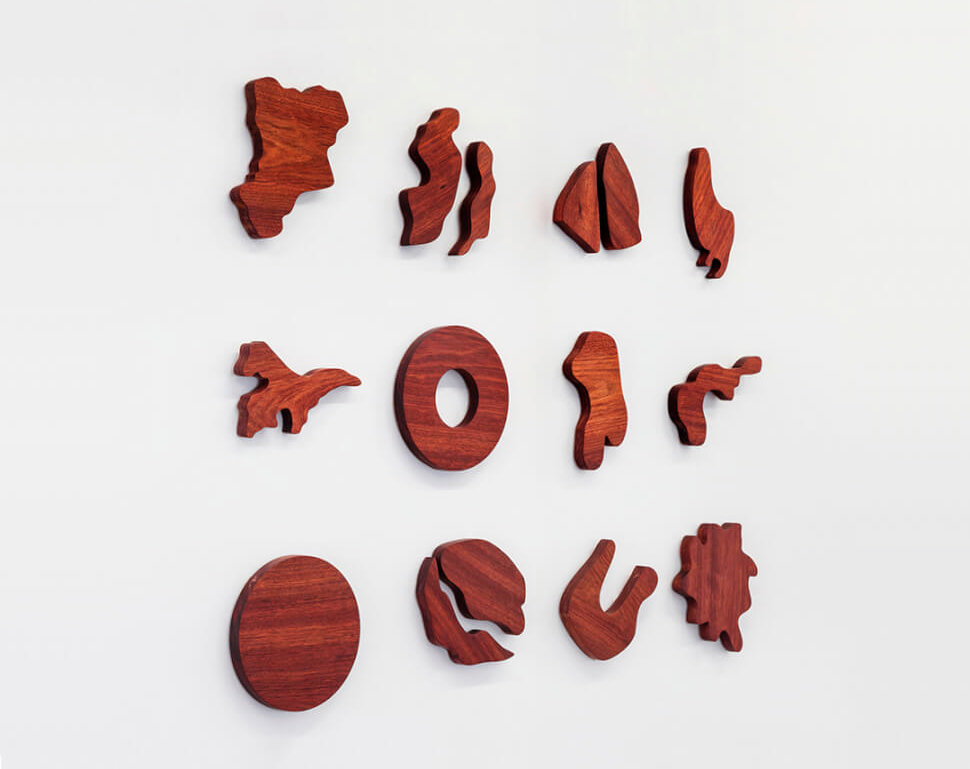 Hy Brazil, by Daniel Jablonski: a set of works about a ghost, a fiction, a myth and an error, The Isle of Brazil.

Hy Brazil is an investigation about error, deception, delusion. In a set of five works, Brazilian artist Daniel Jablonski takes as its object a ghost island called “Brazil” (or Hy Bressail, O’Brazil, Bracil, Bracir etc.) long before the discovery of America. Usually located close to the coast of Ireland, it was virtually present in all nautical maps, from 1325 to 1870, until it was finally discarded by modern cartography. In the meantime, the isle of Brazil has occupied a privileged place in the imagination of the Age of Exploration and beyond – in literature, scholasticism, mythology and even ufology – as a wonderful but unreachable place.

By drawing a true cartography of deception, Hy Brazil points beyond the simple homonymy with the South American country. For, when seen from afar, outside or above, Brazil does not seem to be anything more than this desert island waiting for a colonizer, this virgin significant waiting for a redemptive discourse. Its concrete existence – with its own history, geography and culture – does nothng to change its essentially ghostly status. After all, today as yesterday, no reality has ever prevented the wildest ghosts of desire and the unconscious from flourishing and proliferating here. A vacant metaphor, says Malachy Tallack, “Hy Brazil is a ghost, a fiction, a myth and an error. It is all of that and, in the end, it is nothing”.

The Hy Brazil project would be shown in the Solo sector of SP-Arte 2020, curated by Alexia Tala; event canceled due to the global coronavirus epidemic. See below the works that integrate it. 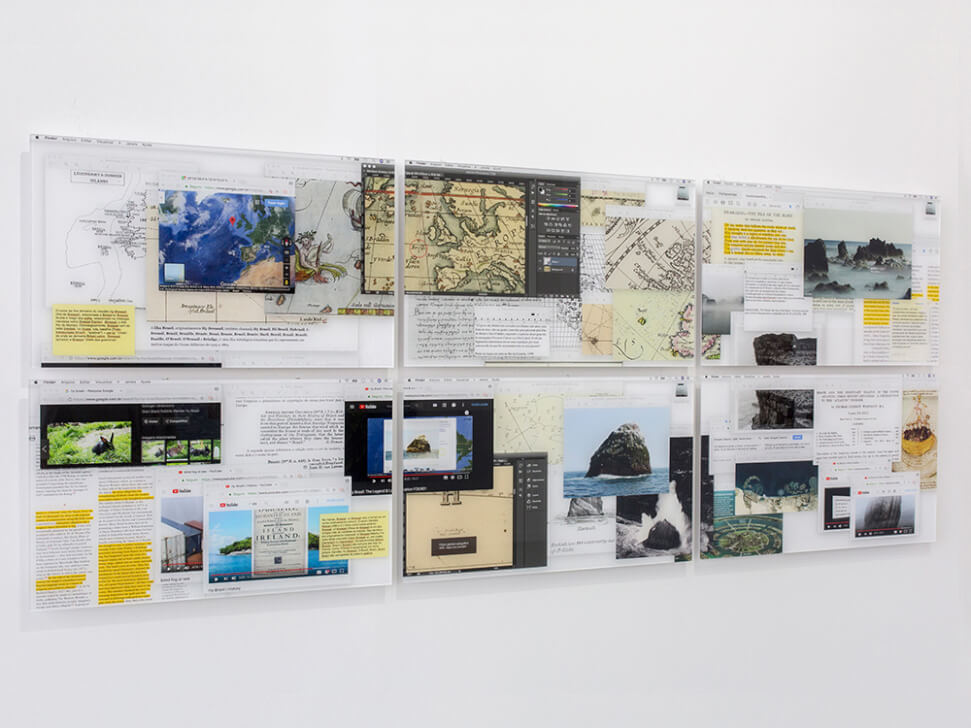 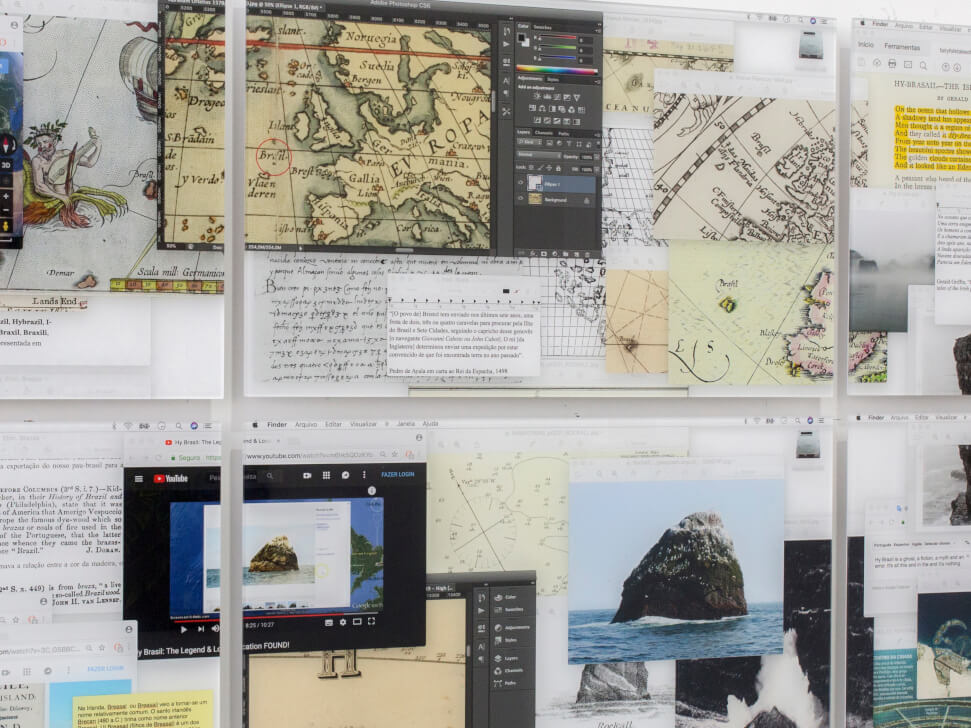 It is the starting point of the entire project. The work is a digital collage, made out of screenshots from six computer monitors, displaying the results of an extensive online research about Brazil, the island. It explores the functions of several digital tools (Google Maps, Wikipedia, Photoshop, PDF reader, Image banks, Youtube etc.) to organize the different narratives, which intertwine the screens. The choice for finishing the prints in methacrylate is justified in the evocation of the glassy aspect of computers’ screens, smartphones and tablets, which inevitably mediate our relationship with reality. 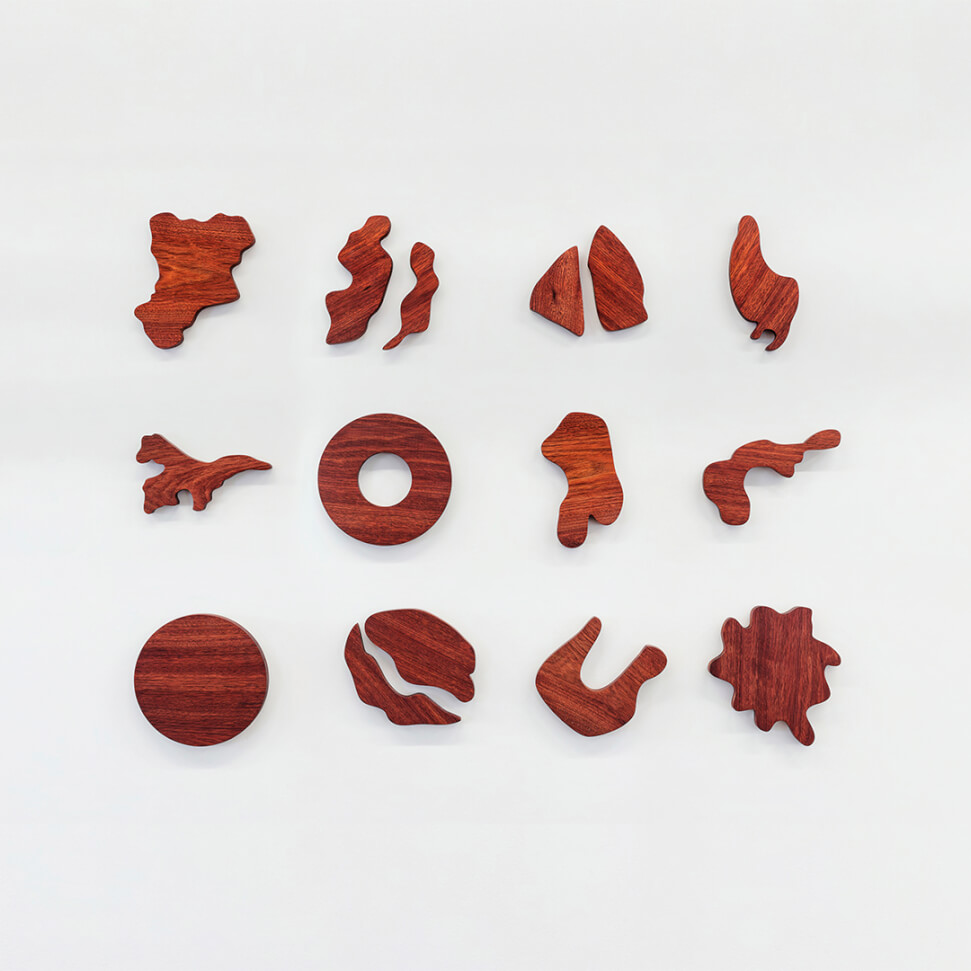 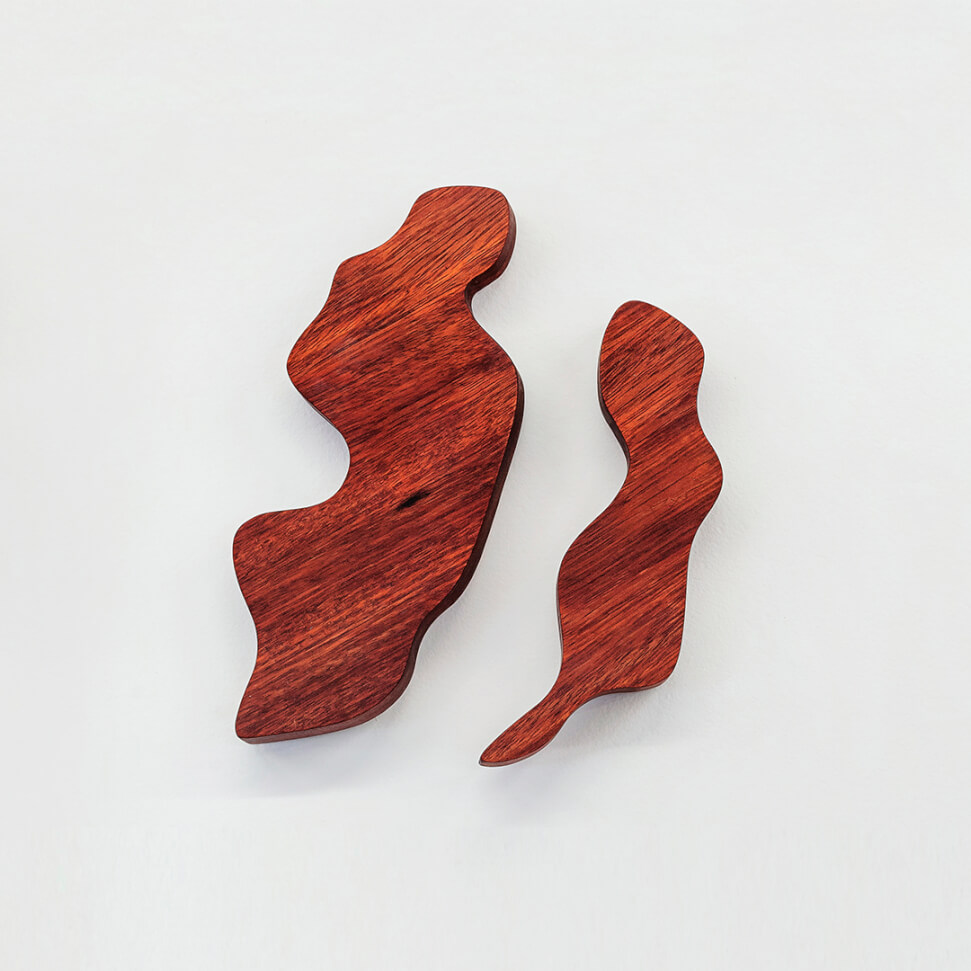 Set of 48 wooden cutouts that reproduce the various formats attributed to the Isle of Brazil, on maps from the 14th to the 19th centuries. Each cartographer redefined it in reference to previous maps but also by incorporating supposed descriptions of travelers, such as the Basque Lope García de Salazar (1399-1476), who describes it in 1471-6 as being “round, small and flat”. In addition to its circular character, the idea that it would contain a lagoon in its center, or be crossed by a river, is also constant. The different shapes were cut in Muirapiranga, a wood that was often confused with Pau-Brasil, the reddish-colored tree that gave Brazil its name (and perhaps the island itself). Among other popular names, such as “Conduru de Sangue” and “Pau-Rainha”, this tree is officially labelled here as “Falso Pau-Brasil” (Fake Brazil-wood). 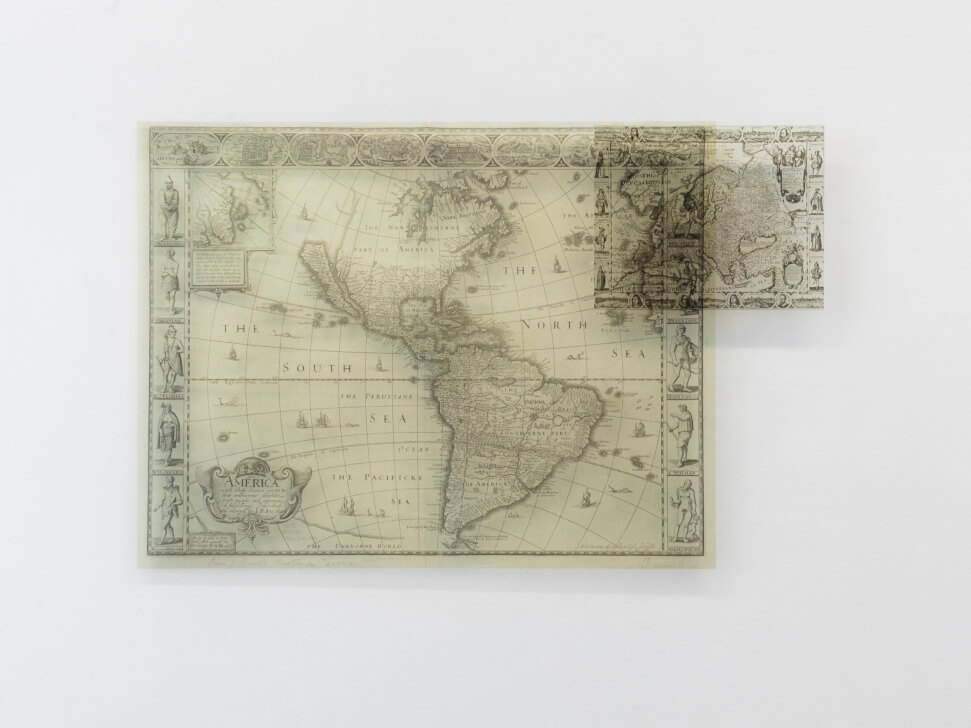 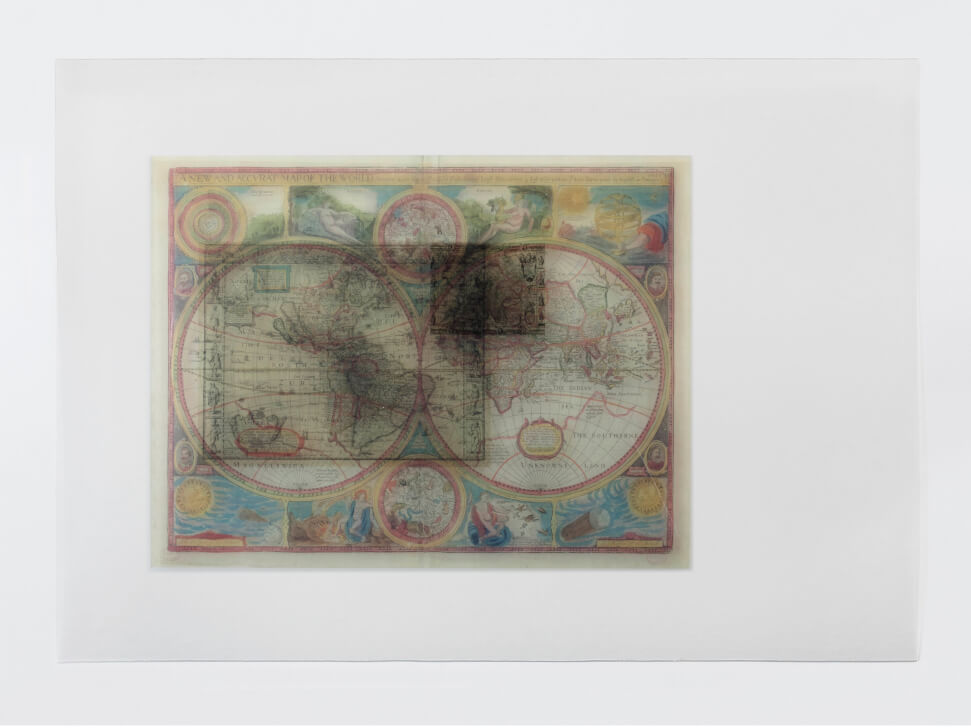 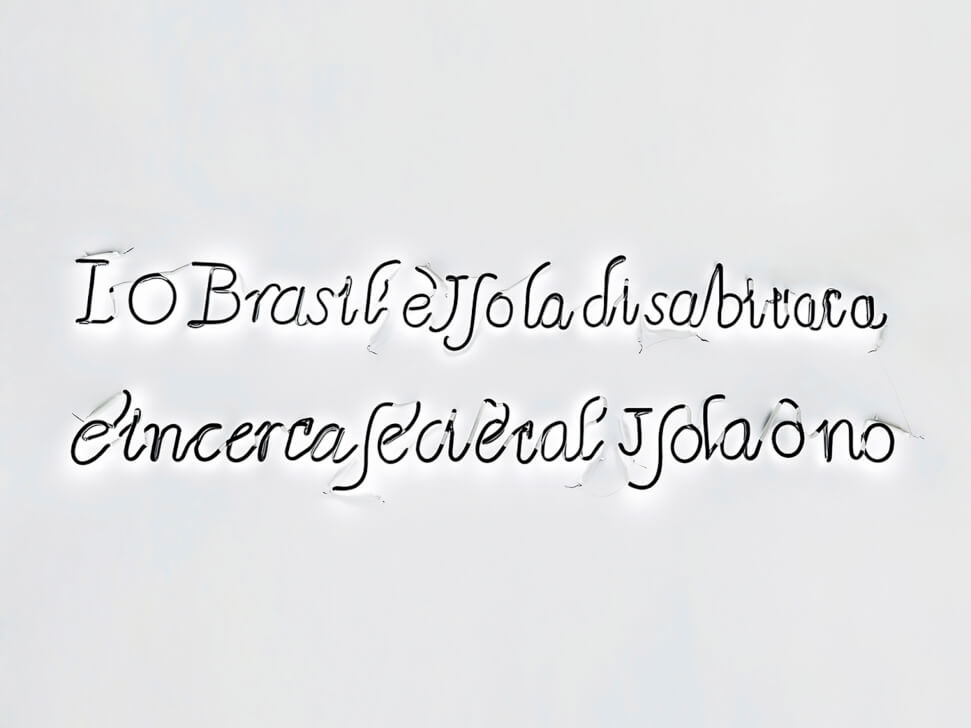 Reproduction of a handwritten note by English cartographer Robert Dudley (1574-1649) in his “Carta Particolare dell Mare di Ierlandia e Parte di Inghilterra e della Iscotia”, in his atlas Dell’arcano del Mare, 1646-47. Next to the Isle of Brazil, which appears in the North Atlantic, now taking the form of an atoll, he writes in archaic Italian: “I. O Brasil è Isola disabtitata. È incerta secietal Isola ò no”. What could be translated (roughly) into English as: “I. Brazil is an uninhabited island. It is uncertain whether it is friendly or not”. The neon has its traditional lighting scheme inverted, with the letters in front painted black, shining only by reflection on the wall. 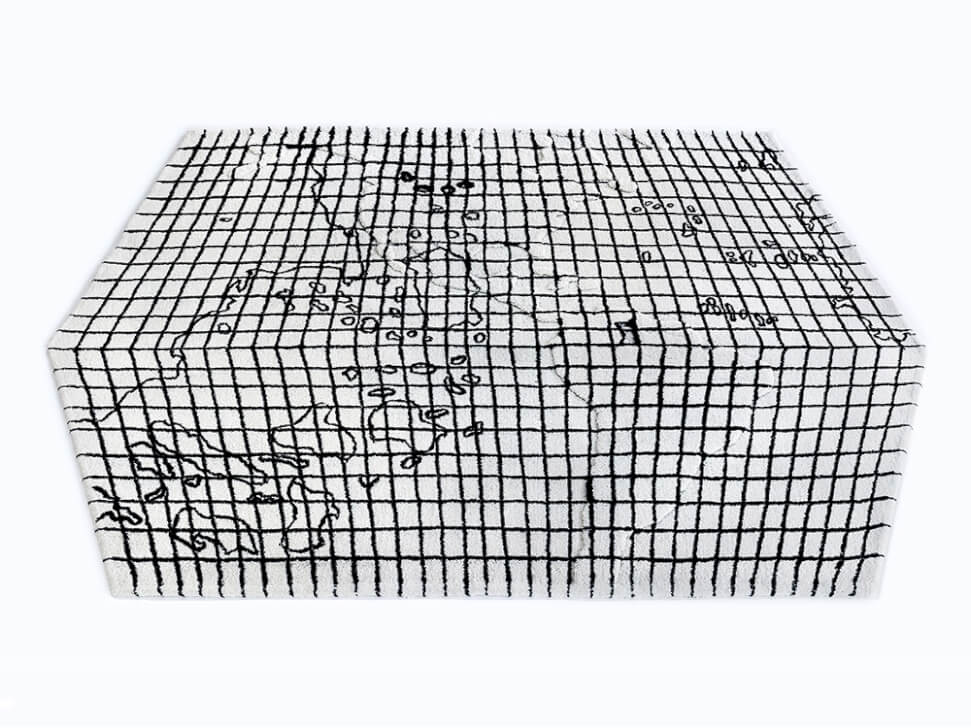 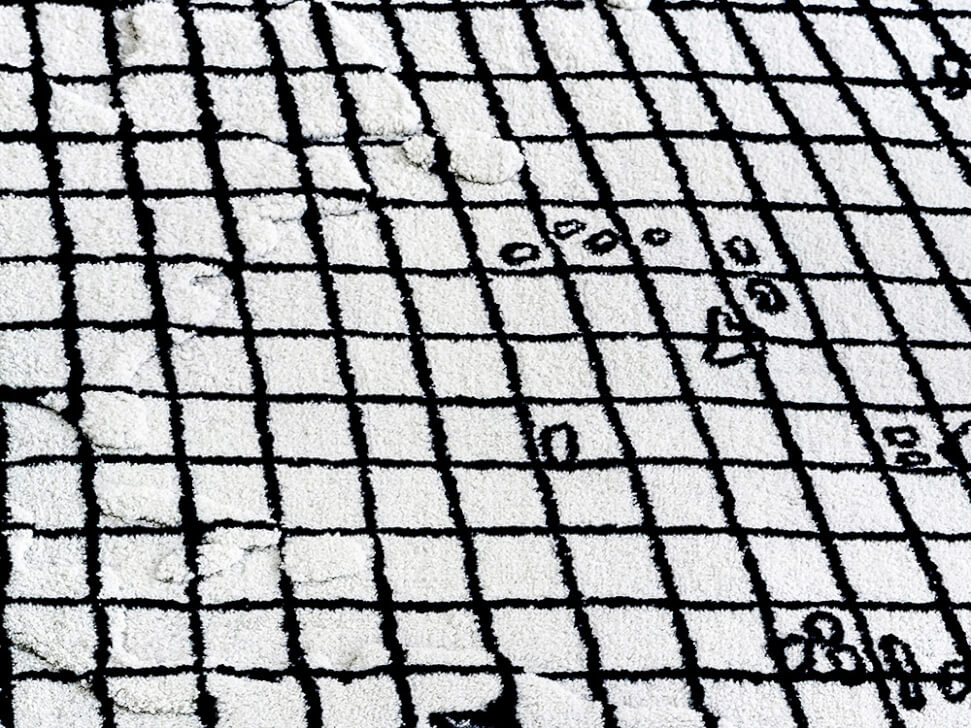 Reproduction of a (lost) map made in 1474 by the Italian cartographer Paolo Toscanelli (1397-1482), one of the first to use the modern latitude and longitude coordinate system. It was reportedly sent to Christopher Columbus along with a letter (which survived) indicating the possibility of reaching the East Indies by sailing towards the West. Toscannelli was at the same time right and wrong, for he stated that such crossing could be made “in a few days if the wind is favorable”. Without this miscalculation in the circumference of the earth, which implied a short trip, Columbus’ expedition would probably never have left Europe. Error that would also explain why Columbus would die believing he arrived in the Indies when he landed in the Caribbean (but there are countless controversies around this topic: some historians claim that the letter and the map would be apocryphal, and the Italian cartographer himself would be a fictional character). The rug shows the reconstruction of the supposed map of Toscanelli, made by Konrad Kretschmer (1864-1945). In it, black lines mark the visible coordinate system and geography of the 15th century, while the interplay of different heights invites the public to accidentally “bump” into America with their feet.